View from the West looking at Mt Leinster. The dark areas are state owned forestry. If you look carefully, you’ll see a tiny square of forest (near the bottom centre of the photo -this is ‘Hollywood’, Carlow’s fourth forest and now on the new 2013 map of the Blackstairs area

A couple of things recently have drawn my attention to the place I make my work. So often I can get lost in the myriad of happenings in this small wood and forget the context in which my work rests.

Firstly I’ve been thinking about the south Carlow 9 Stones Artists group of which I am a member – how we all live in a 5 mile radius of Mt Leinster and the Blackstairs mountains. Mt Leinster is the dominant mountain in this range and is Ireland’s third highest mountain. Its not very big as mountains go, but it is a remarkable ever-changing sight to look at whenever Holly and I come out of our wood to go for a walk.

I’ve also had the good fortune to have Iain Biggs visit from the UK last week; Iain is an arts educator, practitioner and academic. Iain will be helping advise my work for my PhD and has much experience in furthering contemporary art practice, and has an incredible ability to foster networks of artists that are attending deeply to place across England, Wales and Scotland (and further afield). Much of our day together was talking/looking at Hollywood but later in the day I took Iain and Holly up to the 9 Stones lookout on the ridge of Mt Leinster to give Iain a view of the valley. 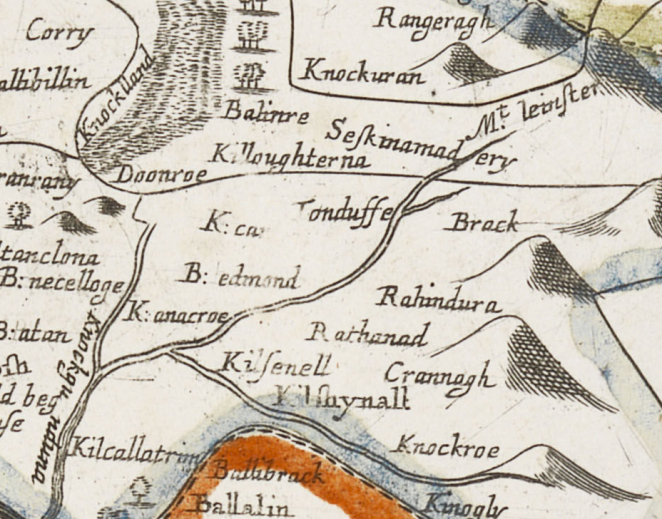 One of the maps from the Down Survey of Ireland: In the centre of the map you can see the word ‘Rahindura’, to the left of it is B. edmond (now known as Killedmond) and Mt Leinster to the right with the other mountains, now known as the ‘Blackstairs mountains’ 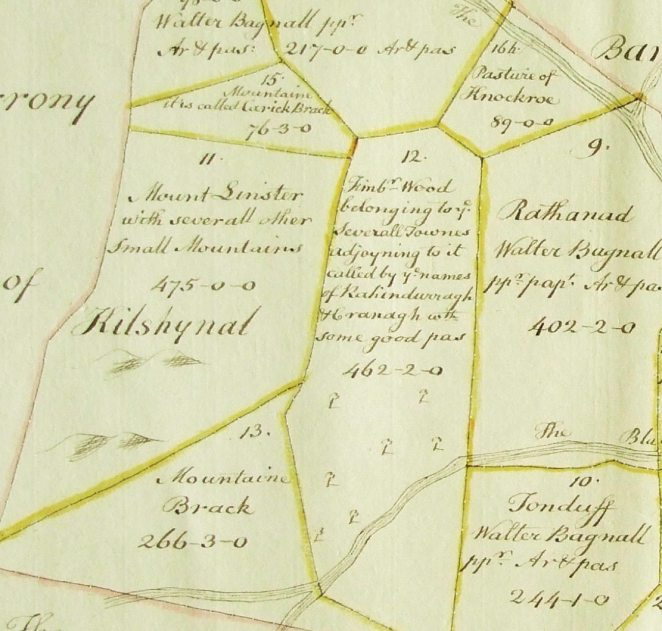 Hollywood is located in (10), we’re just below the small Black River. 350 years ago, across the small lane and river from Hollywood was a commons woodland – Flint Wood (12) ‘belonging to several towns adjoining it’… ‘The quality of the Soyle is Arable pasture, & Wood & Mountain and some bog…’ Terrier, Down Survey of Ireland 17th C. (Note this map is drawn looking South, not North, so Mount Leinster is on the left)

A couple of days later I was looking again at the newly digitized 17th maps of the area, recently made available online by Trinity College Dublin. I was fascinated looking at these 350 year old hand-drawn maps that give details right down to townland and parish level and comparing it to the Google satellite topographies we now have so readily available. On the 17thC map I can even see the crossroads where ‘Hollywood’ is and a former wood that existed in adjoining fields 350 years ago. Amongst small drawn trees on the townland map is written ‘Flint Wood – belonging to several towns adjoining to it called by names of Rahindurragh/Crannagh with some good pasture’ (1656-8), on another Down Survey map its called ‘Rahindura‘ (see above). Our crossroads area is still called ‘Raheendarragh‘ (the little ringfort of the oaks). 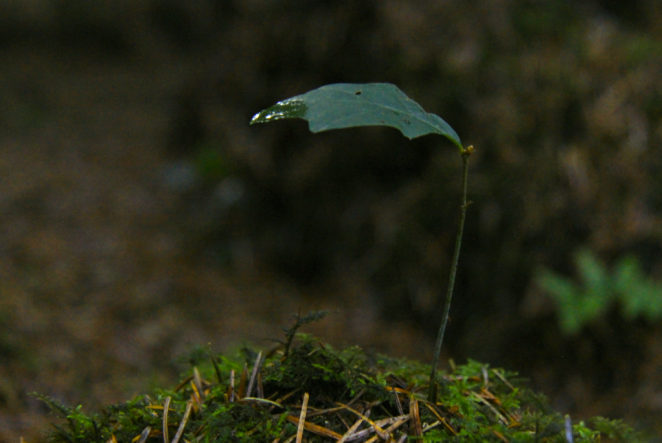 However, the origin of the name of the Mountains – ‘the Blackstairs’ is still debated. The  EastWest mapmakers of the new 2013 map of the area have written about local Gaelic words for ‘mountain’ which sounds a bit like ‘stairs’. Some have thought the ‘Black’ was to do with the geology of the mountain but a well known 19th century book of the area describes is as Dubh Tir or ‘black country’, that this ‘blackness ‘commemorated the massive Oak forests of the area’ (Kennedy, 1855;1989, p.2).

Looking at the Google image above the present day conifer plantations do look ‘black’ on the mountainsides and one can imagine that dense oak forests would have also made these mountains look black at times too. Today, County Carlow is little forested and only has three official forests – the last one only recently created. But there is a fourth… I had put the ‘Hollywood’ project on a ‘pin’ on Google Maps some years ago with a few lines that it was the smallest Close-to-Nature managed forest in Ireland. 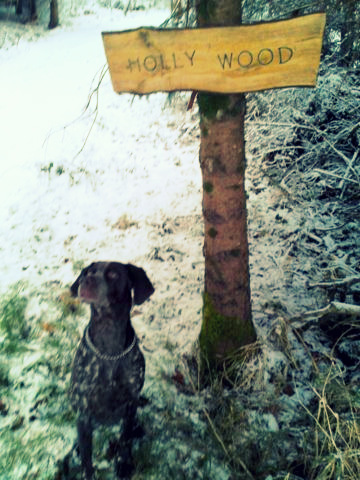 A few months ago I got an excited email from a neighbour, then a week later from my forester, to say, did I know ‘Hollywood’ was now on the new map of the area. Holly of course was delighted!

The Down Survey of Ireland

Taken in the years 1656-1658, the Down Survey of Ireland is the first ever detailed land survey on a national scale anywhere in the world. The survey sought to measure all the land to be forfeited by the Catholic Irish in order to facilitate its redistribution to Merchant Adventurers and English soldiers. Copies of these maps have survived in dozens of libraries and archives throughout Ireland and Britain, as well as in the National Library of France. This Project has brought together for the first time in over 300 years all the surviving maps, digitised them and made them available as a public online resource. See more here

5 thoughts on “Dog puts new Carlow forest on the map”