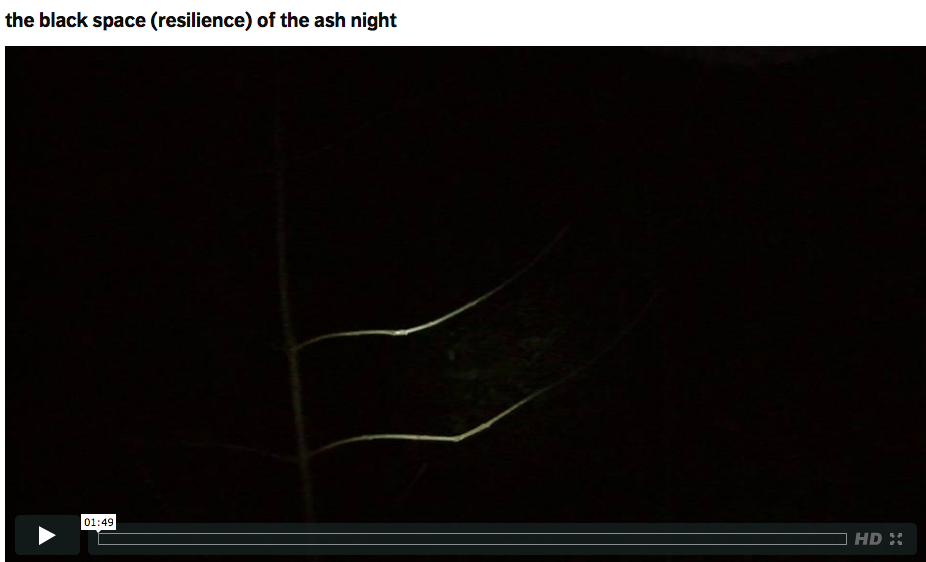 the black space (resilience) of the ash night

I’ve often noticed the areas in my forest that are regenerating well; ‘long live the weeds and the wildness yet’* that is so much a part of a healthy forest.

If I look carefully and low down its hard not to miss all the young Ash trees coming up in their thousands that have appeared since we have selectively harvested our monoculture conifer plantation to transform it to a mixed species, permanent, non clearfell (clearcut) forest.

I’ve long been fascinated too, when driving through my small forest at night how my car headlights, or torch when out walking, reveals all the young stems, that will make up part of our biodiverse future and resilient forest

Some notes on the video below: (its a rough sketch so comments welcome)

there is something deathly about the night – its hard too when looking at these young Ash trees not to think of Ash die-back disease these days and the decimating effect it will have for Ireland’s native forests (its Ireland’s most common native tree)… and in general terms, the ‘blackness’ that is engulfing the earth’s living communities due to the exponentially accelerating, globalised, ecocidal violence of industrialised culture

but also how this forest, naturally regenerating and diverse, will have genetic and environmental resiliences… particularly if we tend and thin the trees later (overcrowded trees are more stressed and more likely to be susceptible to disease and pests, ever increasing threats now with climate change)

there is something oddly reassuring about young trees at night too… all that quiet, relentless growing, in the cold, wet dark, amongst the brambles and Alder; supported in turn by the vast networks of decay and recycling by the microbial communities in the dark below

from different angles and lighting, the scale of these Ash trees is hard to determine…it challenges our perceptions of a forest (hence I also let our dog Holly walk through at one stage to interrupt the spatial qualities of the scene)

I end the video with an undefined sound accent that I introduced earlier in the film to associate with the Ash trees. To perhaps suggest that we have much to learn still from the complex resilience of the strange, black space of the Ash night
____________________

21 thoughts on “the black space (resilience) of the ash night”