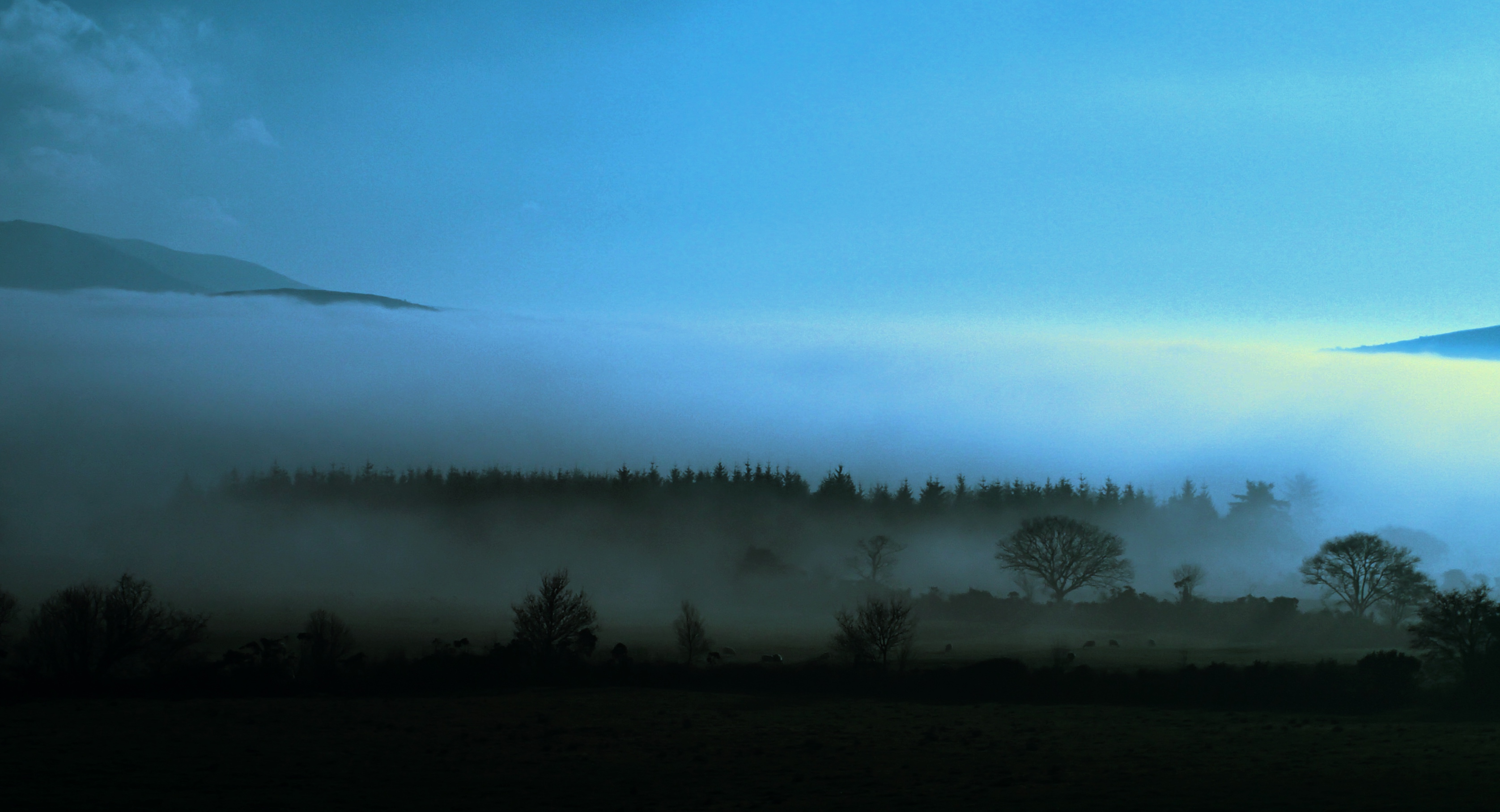 Since 2008, The Hollywood Forest Story tells how new-to-Ireland continuous cover forestry is transforming a small conifer plantation into a permanent, mixed species forest. Its one new story for Earthly wellbeing. Its also a story of the social power of ecosocial art practice to foster ecoliteracy and agency for creative practitioners and their audiences. Such work contributes an 'ecological turn' for an eduring wiser, compassionate and more beautiful world.

The above short video shares the early stages of the transformation of Hollywood Forest in South County Carlow, Ireland, that has become “the little wood that could”.

There is no human dialogue, rather, the forest inhabitants will show you the changes. Hollywood forest began as a small conifer monoculture plantation like much of the world’s now dominant but damaging industrial forestry – Sitka Spruce trees from North America, were planted closely together in rows to be clear-felled after 40 years.

With guidance from professional foresters (from ProSilva Ireland), I and my husband undertook to make a permanent, biodiverse forest and learn how plantations could be transformed into new-to-Ireland continuous cover forests. I explored this ecological forestry alongside my deep interest in situated ecological art practices – practices that evolve collective stories for the better, more beautiful world we know is possible.

Update 2021: I now teach a unique ONLINE course – the Haumea Essential Ecoliteracy 7-week course – to help creatives and art professionals across the world understand the ecology emergency and what it means for the creative sector- see more here: please note, course places fill quickly, but I do maintain a waitlist. Thank you!

“The struggle of embracing our moment—is the struggle
that we live in the most destructive moment in 65 million years!”

“There are opportunities even in the most difficult moments.”

Hello, I’m an Irish-based New Zealander living in rural Ireland since the late 1990s. My creative work is a response to ecosocial concerns arising from environmental emergency.

Kia Ora– Hello! My name is Cathy Fitzgerald, and I’m an Irish-based New Zealander living in rural Ireland, the home of my ancestors these past 20 years.

Since the late 1990s, I have been inspired by the emergent art and ecology field in visual culture, and later, more specifically in contemporary ecological art practice and research.

My forest ecosocial art inspiration comes from my early career in research science which connects to my intuition that I sensed as a child– that there is inexplicable power and magic in art. I was blessed too, growing up in Aotearoa New Zealand – I’ve long been inspired by its pristine, stunningly beautiful, bird-filled forests.

I am best know for the ongoing ecological art practice The Hollywood Forest Story (begun in 2008), the story of the ‘little wood that could’ that I live with in South County Carlow Ireland – the story told on this blog about the efforts to transform the monoculture conifer plantation myself, my husband, live within, to a beautiful, permanent and productive, multispecies, birdfilled forest.

I am also know for founding the worldfirst Haumea online Essential Ecoliteracy Course Programme for Creative Professionals. That story is shared at Haumea.ie

Highlights from the Hollywood Forest Story…

My ongoing ‘slow art’ practice The Hollywood Forest Story (begun in 2008) is inspired by the small conifer plantation community that I live with, in south County Carlow, Ireland. I am passionate about new permanent, mixed species forestry as an urgent and necessary alternative to the ecocide of industrial clearfell monoculture forestry that is the predominant forestry practised in Ireland and many parts of the world.

My creative practice is a transversal activity in which I combine knowledge from art and non-art disciplines with real-world insights.

The video (below) commemorates some of the key stages of The Hollywood Forest Story over the last decade, with a nod to Rachel Carson’s seminal environmental book Silent Spring.

What others are saying:

The Symbiocene, as a period in the history of humanity on this Earth, will be characterized by the human intelligence and praxis that replicate the symbiotic and mutually reinforcing life-reproducing forms and processes found in living systems. This period of human existence will be a positive affirmation of life, and it offers the possibility of the complete reintegration of the human body, psyche, and culture with the rest of life… As with solastalgia, contemporary artists have been inspired by the Symbiocene to negate the Anthropocene. The artists Jenny Brown in Australia and Cathy Fitzgerald in Ireland have both delivered powerful responses to this relatively new idea.

The orientation of Cathy’s activity is simultaneously ecological, creative, political, and educational. It’s cross-referenced through extensive personal interaction and strategic use of social media – both of which are aimed at multiple constituencies. Her intention in cross-fertilizing forestry with creative film work, writing, and political action is to encourage exchange between diverse constituencies so as to provoke ecosophical thinking. So her public self-education as a forester creatively sets out to mesh together innovative forestry practice, new conceptions of the nature/culture relationship, and fundamental issues of community and environment – thus offering new ideas and models to a variety of lay and specialist constituencies.

Watched your presentation this morning, Cathy
And found it very solid, galvanising, gentle and dogged (!).
I really appreciate the work you are doing.

Cathy understands her work as a form of  ‘deep sustainability’: it includes ecological functions, aesthetic innovations, and most importantly, community-based environmental consciousness through forest policy development, which entails an alteration in how individuals relate to their communities. She first learned about community forestry practices in 1995 through a South Leitrim Crann project; eleven years later, she revisited the place through a documentary lens and exhibition space, with support from Crann and The Dock in County Leitrim. In these artistic works, Cathy brought together the voices and images of local people who volunteered to plant broadleaf woodlands almost twenty years ago. This new sustainable wood culture in what was a monoculture conifer region now offers an ecological and economic model for other regions in Ireland. Cathy argues for careful tending of land-bases that we must return to if all species are ‘to survive and thrive’. Her attention to place also asks us to slow down and pay attention to the richness of forest lives. There is a practical value in slowness: it’s healthy for us to pay attention to the textures of places. It allows us to create unexpected networks with lives that we wouldn’t have otherwise come into contact with.

‘I was most struck by the line – “there is something oddly reassuring about young trees at night” …. I doubt I can add anything so beautiful as the previous comments but I do admire the blend of poetry and prose in your written description. There’s also a moment in the video when your dog walks out of the blackness and into the light that is wonderfully startling and reassuring. The eyes in the blackness evoke the ancient fear of wolves or being watched followed by the lollygagging (not quite bounding) gait of a trusted companion. The wild and domestic in one lovable body much like your like your own little patch of forest which must be managed in order to restore wildness. In the video I almost wished that the early shot where you pull focus on the bramble would be held just a moment longer so we can situate ourselves before the montage of ash branches begins. Minor details though, as this is enthralling. A blend of familiar and unfamiliar that only shooting at night can reveal.

‘Thank you so much for your fantastic videos. They are deeply moving in their simplicity. The videos are very moving, – a very clear way of communicating this huge catastrophe on an intimate scale ‘

See the summary video-reel of videos I have created over the years below.