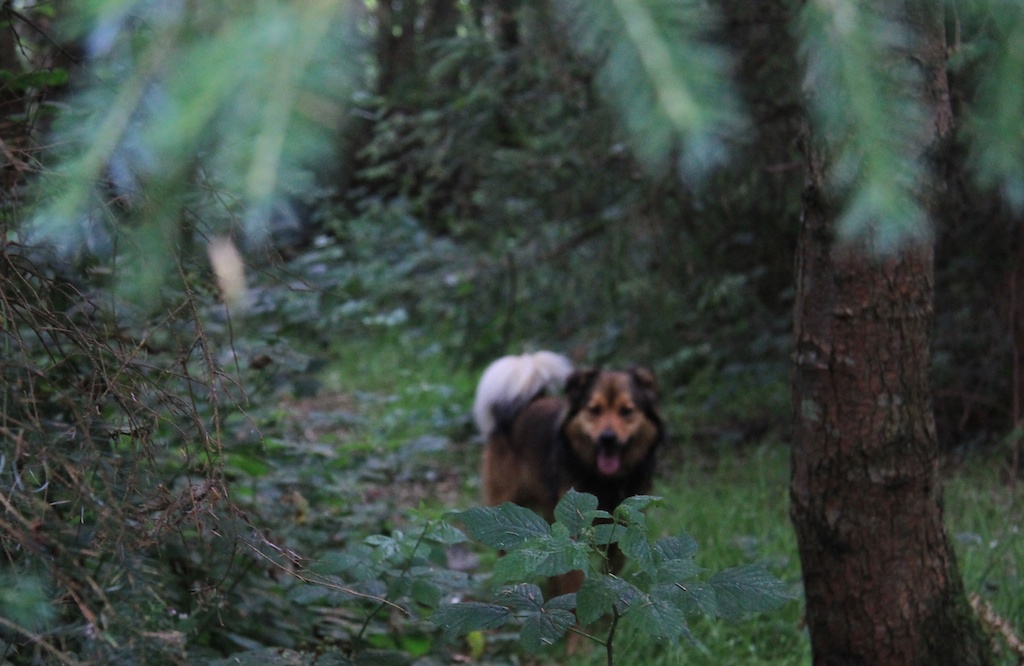 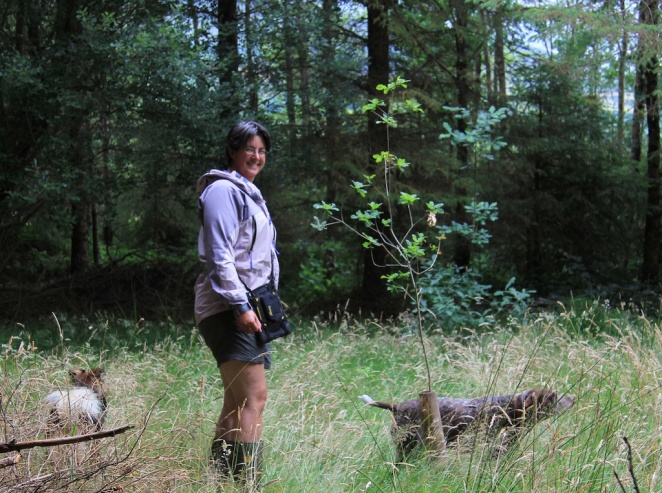 We were very fortunate in the summer to have a visit to Hollywood by a professional ecologist. I have got to know Faith Wilson as she is on the ProSilva Ireland committee with me. She too is very interested in the growing uptake in Ireland toward non clearfell, permanent forestry. To date, much emphasis on this new type of forestry management has concentrated on economic values so its fantastic to see ecologists teaching us why this type of forestry has possibly even more important ecological values for the long term. One of the most interesting observations Faith made was how Ireland still lags behind the UK in its knowledge of its own ecological heritage. When I contacted Faith I found she was in the area doing bat surveys so she was delighted to come and visit Hollywood. I created a slideshow of what we found.

We spent a few hours looking at Hollywood from an ecologist’s point of view. While Hollywood is still predominantly a conifer plantation, the two thinnings in 2008 and in 2013 that have let more light into the forest, have encouraged more species diversity. Much of this is occurring from plants spreading by seeds from our mature hedgerows, others are being brought in by our five resident magpies and  two sets of pigeons (we don’t have a lot of bigger birds as our forest is only 30 years old!). We’ve also done some ‘enrichment planting’, deliberately bringing in species to  increase the ecological and economic values of the forest. More economically valuable trees are important as they help cover the costs in time for future thinnings.

One thing I have been interested in is more formally logging the changes in the forest. This particularly since Hollywood is part of the Irish COFORD research project on conifer plantations being transformed to permanent forestry methods and also to value the scientific method in general, as I’ve discussed previously. Faith talked about ‘fixed point photography’ versus setting up quadrants (permanent squared areas that you revisit to note changes). Initially I thought our forest being so small that fixed photos from points every season would be a good idea but we have found ourselves setting up three 10x10m quadrants (I’ll show you this in future posts) in different areas. Somehow, putting an artificial ‘square’ around an area means one can instantly focus on total activity in one area – to me more information can be captured than by a single image.

Best find! Yum, these might be small but wild strawberries (Fragaria vesca) are full of flavour. Faith was saying it can be easily confused with the barren strawberry (Potentilla sterilis) which will disapoint as it doesn’t have any yummy berries.

I had often thought that nothing would grow on the thick carpet of conifer needles… this is the lovely Herb Robert (Geranium robertianum). It grows in this circular way and has small pink flowers.

Violet, more common in our hedgerows but moving into the forest now.

Honeysuckle is coming into Hollwood. It is a woodland shrub. Honeysuckle (Lonicera periclymenum) is an important climber in Irish woodlands and hedgerows. Flowers have an amazing scent at night and are pollinated by moths.

Tormentil (Potentilla erecta) a species of the bog, wet heath and wet grasslands. Will have nice yellow flowers.

Ragwort (Senecio vulgaris) despite all the negative press has good biological value even if poisionous to cattle/horses. For example, Ragwort is the foodplant for the cinnabar moth.

On edge of the forest, in damp areas, one of my favourite flowering plants -Ragged robin (Lychnis flos-cuculi) 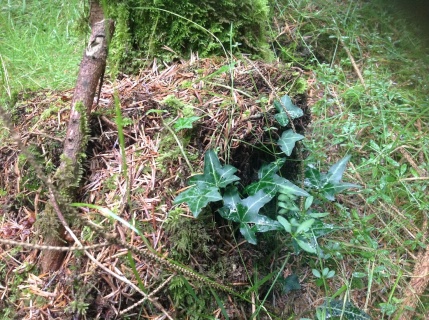 Common ivy creeps everywhere, along with sphagnum moss and brambles.

Woundwort, almost as pretty as bluebells where it appears under some of our conifers

fox scat – have seen foxes passing through here at night, they are not living here, too small an area.

The sitka spruce seemed to be exuding a lot of sap this year, so were often covered with all these black beetles on branches – we couldn’t confirm what these were. Any guesses?? The wasps were also very prevalent this year and also attracted to the sap, along with bumblebees. Disturbingly we saw no honey bees this year in our area.

Dying alder is an important food for shelf fungi

Similarily, the pigeons are ‘bringing’ in Beech trees. This is where Holly has an important role in keeping rabbits out of the forest.

Enrichment planting – bringing in new species to add to the value and biodiversity of the forest. The Forest inspectors in January advised our site would be well suited for Western Red cedar. It provides great shelter and timber. Timber-wise it would be a more valuable tree than our present Sitka Spruce. Our forester planted about 40 of these in February and they seem to have survived our dry summer.

The rare Irish Bird Cherry (Prunus padus). I planted three of these a number of years ago and they have thrived. Faith was telling me they are on the International Union for the Conservation of Nature and Natural Resources (IUCN) ‘Red List’ of threatened species. This is enrichment planting primarily for biodiversity. Its a very attractive tree with a warm satin brown stem and flowers very early in the spring.

I’ve always been curious about some very established trees in a nearby field down the road -great old oaks, along with Horse chestnut, Scots pine, Beech, Hazel and the most wonderful bluebells in spring. Faith guessed this area may indicate remnants of plantings from the former Borris House lands that extended to this area in the past. Its an important sign how well these species grow in these site conditions… and what parts of Hollywood might look like in the future, although will be retaining more conifers on our site.

Faith also talked about creating ‘ecological chimneys’. Areas in the forest to create biological diversity and she stressed favouring ‘trees for the future’ in this respect. It was great to hear too that our Bird Cherry trees that are doing so well on our wet site are an important species to foster, as they are rare now across Ireland due to change in land use. Faith suggested we introduce hazel as an ‘understory’ and I know this grows well here as its growing in hedgerows down the lane.

I have some chores to do too; high prune the conifers in winter near young oaks, to protect there young growing shoots from the sharp Sitka needle branches and do a management plan for the forest too.

It was a beautiful summers day. I remarked to Faith about the small birds that move in flocks around our forest. Faith said these were coal tits and wrens that in summer fly together for ‘family outings’ – to teach young birds how to fly. Ecology is Gorgeous!

PS the next ProSilva Ireland open forest day will be concentrating on the ecological benefits of Close-to-nature continuous cover forestry. See the ProSilva Ireland website http://www.prosilvaireland.org for details.