The DOORS at Hollywood

It doesn’t matter if you sit at home and stare at the ants on your veranda
or the shadows of the trees and grasses in your garden.

Since my recent talk in Hollywood, I have being startled to reflect how my artful forest work might affecting others… and how, in turn, it is highlighting others’ special skills of relating to place.

In fact, I’ve been surprised by the trickle of visitors coming to Hollywood over the last year– how rich some of the discussions are, the gifts people are bringing back to the work and what gets noticed.

A couple of visitors in the last week have certainly astonished me and I talk about the first visitor in this post.

A longtime visitor to Hollywood is a friend and gifted woodworker, Albert Fogarty. Although the term woodworker doesn’t really do Albert justice. Albert has been working, on and off, at our place since we have built our home in Hollywood ten years ago. He skillfully put in our wooden floors, and also constructed a wonderful custom-made slatted shed for drying the logs we thin from Hollywood (dry wood is a necessity as we are in the process of getting a wood gasifier to heat our home to move away from oil and all the dilemmas that relying on fossil fuels entails). Albert also last summer created a unique one-off open studio for my husbands’ stone carving work.

Albert’s ethos shines through all his work – the selection process of the timber he works with is always carefully attended to; for example, our own Sitka spruce is not suitable for construction (it grows too fast for strength) so Albert sources all the timber locally, if possible, or uses recycled timber. Sometimes this can take time; there will conversations to assess a balance in cost and timber availability, but this a crucial attending that sustains a local forest economy. Albert is a 4th generation woodworker so I expect at times he doesn’t realise the care he gives in this respect. Far too many rush thoughtlessly to use imported timbers in Ireland, that may be more easily available but in doing so give little support to our fledgling forest economy, or worse, ignore the devastation imported timbers from other regions may incur.

Over the years Albert has also been witnessing the development of my own artful forest work. Many times over shared lunches we’ve been discussing all things ‘foresty’ – from the values of different timbers to the despair we share about the negligent use of timbers imported from communities afar, also knowing that this is a tragic irony when Ireland itself still suffers from the consequences of a long history of deforestation.

But what astonished me was a work, just installed here last weekend, that Albert created in a barter exchange for one of my husband’s stone sculptures. (see slideshow below) 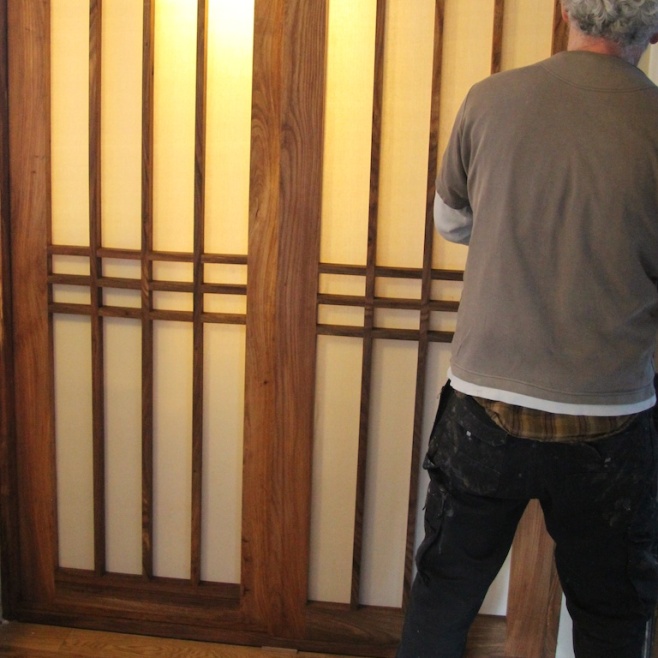 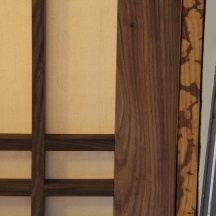 Since our house was built, our linen cupboard (or ‘press’ as they say here in Ireland) has had no doors but a makeshift curtain and in time we’d often thought we’d get Albert to make some doors. And just as the last people were leaving after my recent talk during the 1st Blackstairs rural film festival, Albert showed us a piece of elm, “Would this be alright for the linen press doors?” A later phone call from Albert was on the question of style – I remember saying – “Go wild Albert, show me, what you can do with that elm”. Of course, being preoccupied by other things I forgot that Albert greatest love is not always outside building work but cabinet-making and wood restoration. So we now have an extraordinary set of doors, as you can see – for our linen cupboard!!

Of course, there is a story to “the Doors” … I should have known Albert hadn’t forgotten some of our conversations:

Albert told me smilingly “Guess what, this Elm tree wasn’t felled, but died from natural causes – and came right here from this Blackstairs county”.

Making “the doors” from elm, Albert knew, would be a reminder of extinct species (elm trees have almost entirely disappeared from Ireland in recent decades and I’m constantly aware, and saying, how can we have lost half of the world’s biodiversity in just the last few decades). Also the elm tree in these doors was previously a ‘home’ to others, as there was evidence of woodworm and fungi. Albert moved these creatures on and explained that many people would have thrown this timber away due to the woodworm. It takes a lot of skill to use a wood affected by woodworm and fungi, and its not through all the doors, of course. The fungi too left their legacy  in the incredible pattern on one part of the doors. And “the Doors” are arranged like how the tree originally stood.  Apparently, this is ancient wood-lore – doors set upright as how the tree grew, resist rising damp (which was critical for doors and other structures in this damp climate here). Isn’t that remarkable?

So for me, Albert has created quite a comment against doors from industrial culture. What a different story “the doors” tell of this particular bioregion, its various flora and fauna communities and its very talented inhabitants.

3 thoughts on “The DOORS at Hollywood”