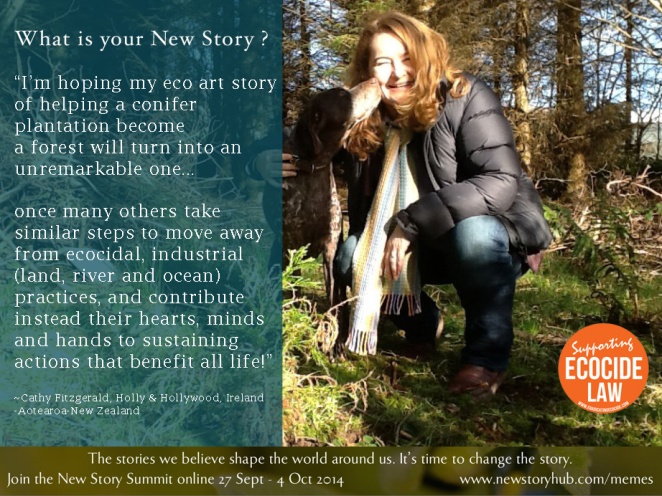 See details on how you can follow the Findhorn New Story Summit (26 Sept-3 Oct) via web-streaming or in Kilkenny below.

Last Sunday an unprecedented 300,000 people marched on International Peace day in New York before the UN Climate Summit. Thousands joined them in other locations across the Earth; even in countries like Australia, whose current government leaders notoriously deny climate science over 30 000 marched in Melbourne! While the #PeoplesClimate March did not feature much in the mass media, there were a multitude of different voices and stories: from celebrities, politicians, religious leaders, economists, social justice groups, feminists, huge numbers of students, business leaders, anti-fracking groups, families, indigenous peoples – each bringing their perspectives and some, their actions for change. Yesterday, at the opening of the UN Climate meeting in New York, a young woman from the Marshall islands, representing us all from civil society, shared ‘her story’ for her new baby daughter, Matafele Peinem (See Kathy Jetnil-Kijiner ‘s short UN talk, followed by her inspiring vision and commitment, our need for moral collective action now, worded in a poem below).

See also the moving video that Kathy prepared and which was screened behind her talk here https://www.youtube.com/watch?v=DJuRjy9k7GA

On a smaller scale, this range of voices will also be heard at the International New Story Summit at Findhorn* in Scotland, starting this Sat 27 Sept-3 Oct, 2014.   As I have written before the theme for the Findhorn New Story Summit is close to my work and centers on the need for ‘new stories’ and models that we need to embrace to live more sustainably. I feel very honoured to be bringing my own artful eco forest story to Findhorn too.

The Findhorn New Story Summit will involve: leading ‘story-tellers’, ‘change-makers’, activists, shamans, educators, indigenous leaders, eco artists, politicians, environmental lawyers and others from across the world.  They will be coming to share their experiences, to build a culture of new stories for the changing and challenging times we are facing. The Summit will collect all the facets that this change will involve; new stories and working models for our education, our spirit, our economics and our politics (see the news that a book will follow this Summit below).

However, with growing interest from all sectors, the Findhorn New Story Summit has been over-subscribed. But you can follow some of the main talks at Findhorn Live online, see the timetable here

There are also New Story Hubs being organised by people around the world too, check here to see if there is one near you or if you wish to bring a group together to watch some of the talks together online.

If you are near Kilkenny, in Ireland, the New Story Kilkenny Hub group, is led by Elinor Mountain (an Irish Findhorn representative). You can join the Kilkenny group to watch the summit opening talks this Saturday, 27 Sept 2014 at 1.30 pm in Ossory Youth, Lower New Street, Kilkenny (beside Ormonde Lighting)(and perhaps other sessions). Limited places are still available. See Elinor Mountain’s  Facebook Event Page for details and directions here 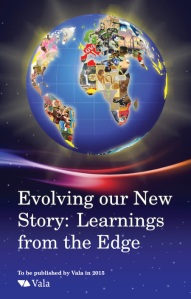 There is also more general information on the Findhorn event here.

If you are interested you can follow the lead up to the event here on the Findhorn New Story Facebook page here and you can also add your ‘story’ to the New Story network site too.

And there has been an announcement this week that a book Evolving our New Story: Learnings from the Edge will be produced by Vala, following the event. Vala is a co-operative publisher and includes Vala authors, like Peter Reason (a leading action researcher). (Vala previously published the Joanna Macy inspired book of new sustainable actions in communities, including the arts Stories of the Great Turning (2013)

“Since 1972 the Findhorn Foundation and community aims to inspire and encourage transformation in human consciousness, to help create a positive future for humanity and our planet. We are a holistic learning centre, community and ecovillage, offering experiential learning and a holistic leadership programme.”