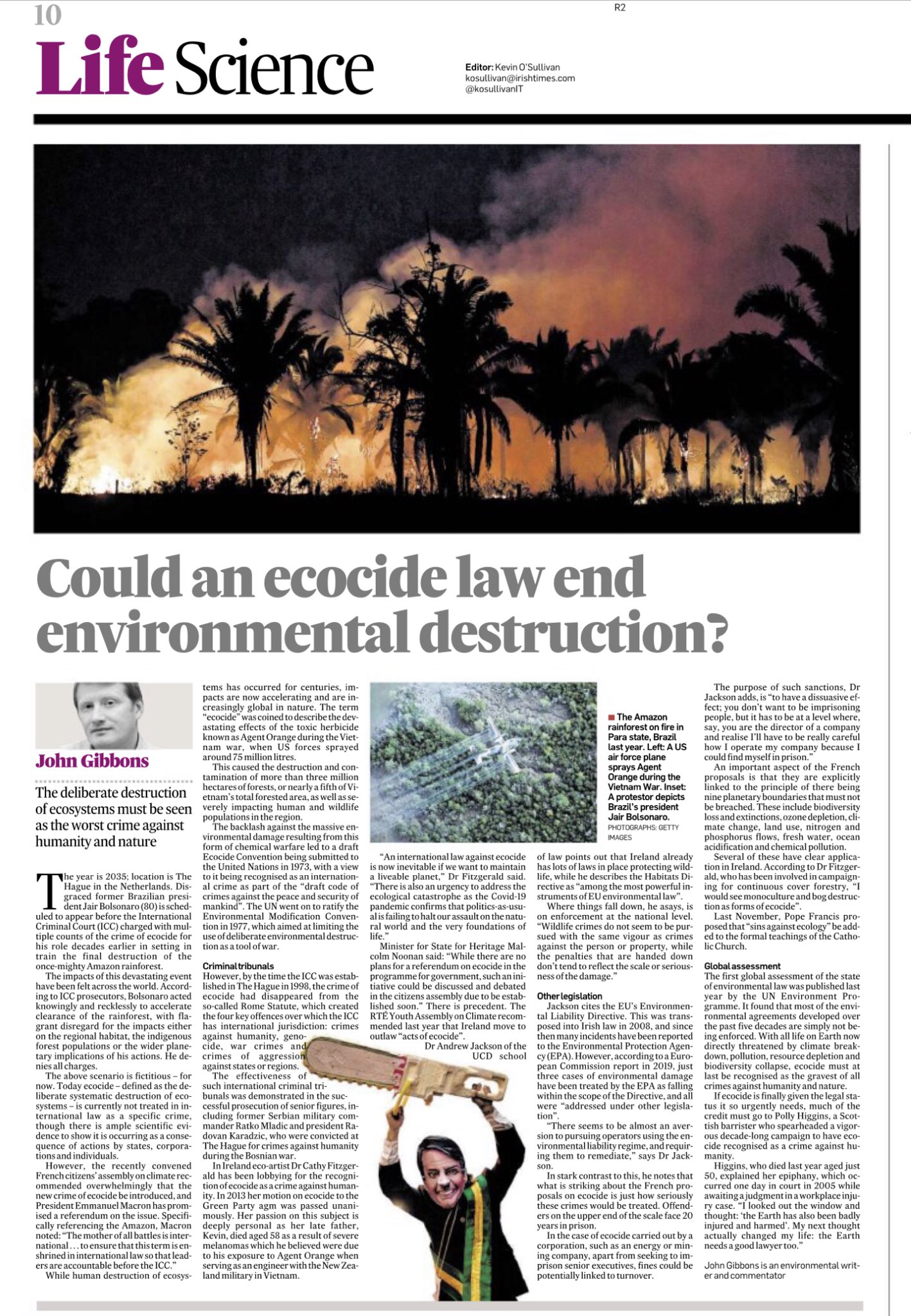 “That’s legend!” – one might say in Ireland on hearing great news. Ireland, wait for it… may in the future propose a national citizens’ referendum to advocate Ireland’s support for the developing international law against the crime of ecocide!! So suggests, Green Junior Minister of State for Biodiversity, Malcolm Noonan, in a recent full-page Irish Times article by journalist John Gibbons this week.

Could Ireland really move from its unremarkable laggardly environmental awareness (as remarked by our former Taoiseach – prime minister Leo Varadkar) to champion an international law that could alter the activities of the 13 or so mega-corporations that continue to cause much of the ecosocial harm across the world? Read the Irish Times article here and listen to the recent talk given by StopEcocide cofounder Jojo Mehta at the UK Law Association (June 2020) about how an international law against the crime of ecocide could dramatically shift the business world away from harming ecosystems, toward sustainability.

For longterm followers of this blog, you will know that I have championed at times, the developing international law against the crime of ecocide in Ireland over the last decade.

If you have forgotten or are new to what an international ecocide law could achieve, far beyond often ineffectual national and EU environmental law, this new summary video by INTERPRT is useful.

The Irish Times article is particularly timely as in recent months during 2020 there has been growing high-level international support for ecocide law to be recognised by the International Criminal Court as the missing international crime against world peace, on the same level as genocide, crimes against humanity, war crimes, and the crime of aggression.

First, the small island nation of Vanuatu, at extreme risk from climate breakdown and sea-level rise, assisted by the efforts of the international Stop Ecocide campaign, made presentations at the International Criminal Court, that the international ecocide law be accepted as part of the Rome Statute (this foundational legal document guides the International Criminal Court in the Hague); the Maldives nation, quickly joined them. Then the Pope supported the efforts for ecocide to be recognised as an international crime last November, perhaps not surprisingly, as it underlines the values of his great ecosocial encyclical Laudato Si and his significant support for the ecosocial values of the Earth Charter. Following this, there was significant advances in recent weeks, with France’s Citizens Assembly on Climate breakdown advocating near unanimous support for national and international ecocide law. President Macron, afterwards even promised a national referendum on ecocide law!

Then last month, the Belgian Green Party proposed an ecocide bill to their government, whilst Greta Thunberg presented an international letter to the EU parliament co-signed by the world’s youth, science and culture leaders and EU citizens (myself included) demanding developing international ecocide law be addressed as a key strategy to counter the business-as-usual business culture that permits grave ecocide and related social injustice. Greta unexpectedly won the first major humanitarian Gulbenkian award at this time and immediately gave 100K to the Stop Ecocide campaign through her foundation. Support for ecocide law is a key demand of the Xtinction Rebellion campaign going forward as well.

And there is ample evidence that this law is workable in a real court situation (Guardian, 2011). The late champion for Ecocide law, Scottish barrister Polly Higgins, who cofounded the Stop Ecocide campaign proved this in a well-publicised mock trial in England.

Almost a decade later in 2020, modern culture’s negative affect on the planet are more apparent than ever. The global pandemic is revealing the effects of ongoing natural habitat destruction and widespread, related structural social inequalities. Unprecedented wildfires, storms, species extinction, increased rates of melting artic ice are always in the headlines. So this is a critical year for the Stop Ecocide campaign. Other signatory state countries to the Rome Statute will also need to stand up, with Vanuatu, the Maldives, France and Belgium to advocate widely for ecocide law.

To prevent further deepening of the ecological emergency, I have long thought Ireland is well positioned, as a small island nation, as a member of the EU, as a member of the International Security Council, and as a country of Christian traditions, to stand up and show solidarity and international leadership for the world’s most at risk communities and collapsing ecologies.

Certainly it would be of consequence for advancing ecological awareness in Ireland if the ecocide law could be explored in the proposed upcoming Irish Citizens Assembly on Biodiversity and Land Use, announced in our new programme for government (date and terms of reference yet to be announced). However, notwithstanding the fragility of our new government coalition, I fear many in Ireland little understand why ecocide law and other progressive ecosocial policies and laws relates to them. Because at the centre of the unprecedented challenges we face, applying ecosocial values – an expanded ‘duty of care’ as Polly Higgins would say – for living well with with each other and the wider community of life would require a seismic shift in modern values towards broader, always interconnected ecosocial values. Urgently overcoming foundational cultural values, accrued over millennia that promote modern culture’s preoccupation for one species, ourselves, and disregard for the wider community of life – it is no small thing…

I have been thinking a lot about this as I introduce the Stop Ecocide campaign in my expanded-Earth ethics module of my online Essential Ecoliteracy course for Creatives and Art Professionals (next course Sept 2020). Trying to instil why it is important to advocate a more explicit ecosocial ethos for ecoart practices and creativity in general (so as to not further perpetuate mindless cultural harm or ignorance), I discuss how the UN Sustainable Development Goals SDGs have arisen and how the Stop Ecocide campaign aligns with these goals.

And to be fair, the UN SDGs have been well discussed in Ireland and have been filtering through Ireland’s county councils, community development NGOs, even to our County Arts Offices and schools. Last year, I was pleased to see them on display in the house and grounds of our Irish president Michael D Higgins.

Ireland, however, better known in recent years for its social justice advances, is surprisingly one of the few developed countries that is NOT a signatory of the Earth Charter. Yet, a country, organisation, education institute, or an individual, does not necessarily need to be a signatory to adopt such values. There is much to gain from a charter whose values have been formulated carefully over two decades from peoples of diverse cultures and beliefs.

The important, urgent question now for Ireland and many countries is, How can we implement any sustainability goals effectively without first becoming fluent about the limitations of our current values, and also inquiring into what embracing ecosocial values will demand from us? When we set personal goals for change, we are more motivated to strive for them, surely, if said goals align with our deepest values.

In my research, I have found Earth Charter ecosocial values clearly help explain the necessity for a paradigm shift toward an ecological era in a simple and clear way. Becoming fluent in common, integrated ecosocial values for the continued thriving of the commons on which we all depend, clarifies why we can no longer bracket out the wellbeing of the wider community of life, in all that we do. And there is certainly a critical role for the culture sector to invite inclusive means for us as a nation to reflect on values that can deliver a thriving, just and beautiful world.

For example, I so admire the fluency of these children, from diverse cultures, expressing ecosocial values from their Earth Charter school in the UK. See how the Earth Charter can be applied in schools here

Just imagine if our nation (and all nations), were similarly well versed in expanded integrated ecosocial values for the common good, that benefit us and the wider community of life in perpetuity. Perhaps I’m overly optimistic –but if we as a people were clear about ecosocial values, we wouldn’t need a referendum to know for a sustainable Ireland, for social justice, for solidarity and peace across the planet, that we should advocate immediate support for establishing Ecocide as an International Crime.

PS: its likely that an Irish campaign to make Ecocide an International Crime will be starting soon, let me know if you want to be involved!

PPS: I have been exploring more about the Earth Charter and took an invite from a friend to submit it as the overarching framework for our draft County Plan for County Carlow. Let me know if you want to read it.

My grateful thanks to creatives Lisa Cliffe, Catherine Barron, Ros Murray, and Phoebe Cope for encouraging my thinking/writing lately. And also to my dear sister Joan who sent me and Martin Stop Ecocide t-shirts.

You can get get support the STOP-Ecocide campaign from anywhere in the world here (if you are in the UK there are two national ecocide petitions to support right now). See https://www.stopecocide.earth/

One thought on “From Laggards to Legends: Ireland begins moves to support new international ecocide law”