The other day I had a group of college art students visiting Hollywood – most of them didn’t seem to know the rate of biodiversity loss that industrial land and ocean practices are causing – the estimated and unprecedented loss of 150 species a day (UN, 2010 figures).

Sustainability as a concept is a term that we hear all the time. But aren’t we, in fact, catastrophically poor at recognising the unsustainability that threads through our daily lives and which is rapidly increasing. I know I feel that when I consider one of the planetary tipping points, biodiversity loss, is rarely mentioned in public discourse of current land practices or in contemporary art that might be focussed on new debates concerning landscape art photography.

And our rate of biodiversity loss exceeds one of 4 planetary boundaries scientists have confirmed as needed to sustain life on Earth (frighteningly, climate change which is more often discussed comes in behind biodiversity loss of the 9 planetary boundaries that the UN accepted in 2009). How do we face these realities and proceed? Do we need more science to add to the volumes of facts that we have known for decades? More sustainable ‘development’ policies that seem to suggest that we can continue to grow our consumer lifestyles infinitely?? Instead, in my recent talk for Collective Conversations about Sustainability (see below) at The Lab Gallery, Dublin a few weeks ago I speak about the crucial, and often overlooked role, that the arts have for societal change in this time of environmental emergency.

Philosopher, nature writer and activist Kathleen Dean Moore recently spoke with writer and environmental activist Derrick Jensen of the urgency of this decade as the ‘hinge decade’ where we must come together to create a ‘social tipping point’ for new  relations to others and the environments that sustain life. Dean Moore and Jensen argue we need to recognise the simplistic or distracting dangers in concentrating our discussions on recycling or adaptation. Instead, it is vital to resist the conventions that industrial culture perpetuates and, critically, we need to recognise where and with whom the power of unsustainable industrial practices lie. But to reach this point Dean Moore argues we have to develop the moral discourse, the skills of rational moral reasoning  and add these urgently to our scientific understanding to help propel society in other more life sustaining directions.

Only this combined activity will foster action about what we as a society deem unacceptable – for today and generations to come. This is where the arts, along with our other cultural traditions have a role to play. We usually associate moral arguments with religious groups but in our fast moving secularised societies Dean Moore explains that we have also sidelined the ability to reason morally. Elsewhere, it is encouraging that we are finally seeing some moral discourse in the mainstream media in the UK in the Guardian and 350.org Divestment Campaign and from some religious leaders. These campaigns and discussions are important, if belated. It is also fantastic that students across the world are leading the Divestment campaign away from fossil fuels (organising sit-ins in the boardrooms of their universities) but again the Irish students I met last week knew nothing of this campaign. Against all this it might seem trivial to discuss the arts in this context yet, all too often we forget that the arts have a significant role to affirm or imagine new values; the arts can engage our hearts and souls to propel social change in our local communities. Fostering a culture of moral reasoning, Dean Moore reminds us, has moved societies towards new values in the past: helping to end slavery, envision the rightness of civil rights, womens’ rights etc. These social tipping points were ushered in with hymns, pop songs, impassioned writings, theatre and films etc. Dean Moore therefore insists that we must urgently foster new values that fit the ecological limits of this living world. This means we need to develop:

A new creativity, an openness to radically re-imagine who we are on Earth and how we ought to live, understanding that the old arrogant answers have led to mistakes of cosmic consequence. A new invigoration of justice—or maybe it’s reverence and maybe it’s love—that honors the life-force in all beings. And new-found moral courage, to refuse to be made into foot soldiers in aggressive wars against the Earth, but rather to live in ways that nourish a world that is whole and beautiful and sustaining.. “

Dean Moore’s work agrees with a point I mention in my talk below, of how  research in 2013 for the UN decided that culture was the missing 4th pillar of sustainability. I talk about my eco-social-art Hollywood project in south Carlow Ireland as an example that brings together aesthetic workings, new forest management, forest policy and justice against ecocide. Transdisciplinary projects, where we can all play a part, where we can bring our different skills, passions and experience together will be part of envisioning change for ourselves, our communities and how we relate to the environments that sustain us. Such art workings may not look like art as you might know it, but creativity has always been a crucial part of our thriving and surviving …

Many thanks to artist educator Méadhbh O’Connor,  filmmaker Jenny Brady and all at the Dublin Arts Office- The Lab Gallery for inviting me to speak and for co-organising such a rich night of conversation about sustainability. Also many thanks for the enthusiastic response from the Wexford 3rd year art students and to Dr Orla Ryan. Holly, Hollywood and I enjoyed meeting you all! 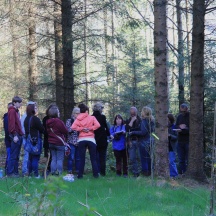 One thought on “Wexford art students visit Hollywood (and Holly)”