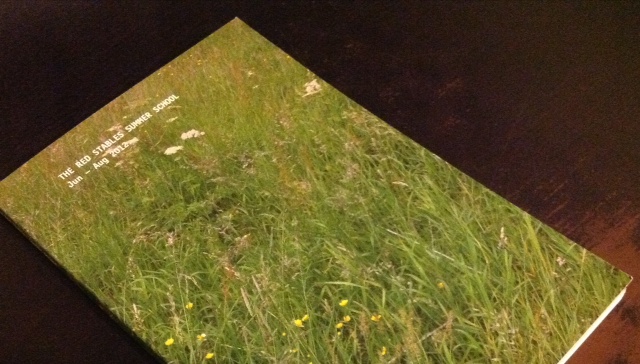 It’s great to see all the events organised by the RedStables and Dublin City Arts Office for their 2nd Art & Ecology event. Details below.

Natural Kinds is an afternoon of talks and screenings at The Red Stables on Thursday 18th July (2–5pm), looking at notions of classification in the natural sciences and Philosophy, stemming from research artist Jenny Brady has been engaged with for the Red Stables Summer School.

The afternoon will include a talk by orchid specialist Brendan Sayers on orchid hybridisation and the wild orchids on Bull Island, and a presentation on the ‘Species Problem’ in Philosophy and Biology by Dr. Niall Connolly, Lecturer in the Philosophy of Science, TCD. A short programme of screenings includes Donna Haraway Reads “The National Geographic” on Primates (1987) by Donna Haraway and Paper Tiger TV, Les Oursins (1958), The Love Life of the Octopus (1967) by Jean Painlevé, and Carve Up, Jenny Brady’s new video work made for The Red Stables Summer School.

Jenny Brady’s Carve Up draws on questions around the nature and conception of species with a focus on the wild orchids growing on Bull Island. The work will be screened in The Red Stables Gallery between 20–31 July from 12:00–5:00pm daily.

The Interpretive Project is a collaboration between Rhona Byrne, Vaari Claffey and Ciara Moore. On Saturday 20th July, the artists will host a live event at the Interpretive Centre. The audience is invited to attend a hybrid lecture proposing a re-imagined history of the island. This live presentation will include readings, film screenings and other visuals. It will weave together histories on the origin, mythology and ecology of Bull Island since its appearance 213 years ago.

The stuffed animals who permanently reside in the space will play a role at this event. In the process of uncovering the ‘history’ of Bull Island as the site of production and conception of a number of seminal historical artworks, the animals adopt the personae and characters of figures from art history and literature and discuss and review a selection of artworks, offering us new insight from the perspective of the non-human animal. They will also share memories and experiences of life on the island for some of the native species and visitors.

The project also includes a participative performance based on the flocking patterns, foraging behaviour and flight formation of the migratory birds on the island and the island itself. This performance is informed by the behaviour and sounds of animals on Bull Island, reflecting the human occasions for such collective behaviours and mass gatherings around ‘feeding, mating and alarm’.

* The Interpretive Project is limited to 50 attendees, advance booking is required.