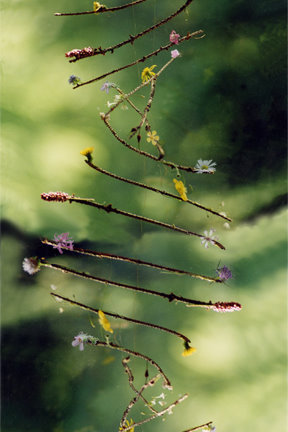 A weed is a plant whose virtues
have not yet been discovered…
Ralph Waldo Emerson
.

It’s over 50 years since the structure of DNA was first identified.

How do we use this knowledge to view living systems today?

.
Often scientific thought is mechanistic and reductive and DNA is seen merely as a code.
.
We hear it likened to a computer code, a code that can be ‘broken’, ‘edited’, ‘cut and pasted’.
.

This piece was featured in:

An artist’s eye in the laboratory

Former microbiologist Catherine Fitzgerald is to take up a residency at Trinity College Dublin – as an artist. She hopes her work will open up a debate, she tells Cormac Sheridan

© IRISH TIMES 16 Sept, 2004This autumn artist Catherine Fitzgerald is going back to college. She plans to take up a three-month residency in the zoology department of Trinity College Dublin, a visit funded by the Arts Council.

It may seem strange to bring an artist into a science environment, but the lab is anything but foreign territory for this particular artist. Before entering the National College of Art and Design, Dublin, in 1996, Fitzgerald spent almost 10 years studying and working as a microbiologist in her native New Zealand. She specialised in chemical methods of preventing microbial growth in meat and she co-authored a number of technical papers on the topic.

Her work as an artist was initially inspired by the abstract forms suggested by the images of bacterial cells viewed through a microscope.This led to a series of delicately worked paintings, a true fusion of art and science.

Her residency will culminate in some as yet undetermined artwork or exhibition that will reflect the developmental genetics research underway in the lab, hosted by Dr Paula Murphy. Fitzgerald’s upcoming residency evolved from her participation last year in Murphy’s weekly genetics tutorial classes for final-year students.

Earlier this year, she exhibited, in the department’s molecular parasitology labs with The Passion Survey, an ongoing, Internet-based investigation into the nature of passion and joy. Next Thursday an exhibition of Fitzgerald’s recent work, including the latest instalment of The Passion Survey, will open in the Royal College of Surgeons in Ireland.

While Fitzgerald draws inspiration from science, she herself has written of the danger for an artist of being in thrall to the “seductive” imagesthrown up by contemporary research. She aims to probe deeper, to examine and give visual expression to some of the underlying dilemmas engendered by science.

The Last Frontier, a piece exhibited in the Royal Hibernian Academy gallery in 2000, encapsulates this more conceptual stance. It consists of a series of petri dishes containing images and objects, including apple seeds (which link scientific progress to the Tree of Knowledge metaphor) and a detail from Joseph Derby’s intriguing 18th- century painting, An Experiment on a Bird in the Air Pump.

This painting depicts a tableau of onlookers watching – with varying degrees of interest or alarm – as a travelling scientist slowly starves a cockatoo of oxygen in order to demonstrate the effects of a vacuum. The work has been interpreted as an effort to capture the varied responses of society to the advent of the scientific and industrial revolution.   Fitzgerald identifies her own position with that of one of the onlookers. ”This girl is just looking on, not quite deciding; I suppose close to where  I am,” she says.   Although influenced by ecologically concerned artists such as Cornelia Hesse-Honneger and Mark Dion, Fitzgerald has not adopted an explicitly condemnatory (or celebratory) position with respect to scientific research. Yet she doubts the value of the Frankenstein metaphor, which has been widely deployed as shorthand for expressing revulsion at biologists’ manipulations of life. ”It interests me, but I don’t think you can go much beyond it really,” she says. “I want the debate to be a bit more opened up. My going back to a laboratory – I actually think that allows a discourse to happen. I’ll be  able to go in and bring information out. “  Her work can provide an oblique commentary on areas of scientific debate. For example, Unwanted Genes, a delicate, DNA-like spiral assembled from weeds, wild flowers, twigs and copper wire, offers a critique of the language of molecular biology, while also highlighting its conceptual shortcomings.  ”Scientists often talk about splicing and editing and cutting and pasting of code. Around 2000 they were talking a lot about junk DNA as if there was no function or quality to it that we should preserve. I just thought there was a slight arrogance there. I just thought we’re being a bit hasty,” she says.   That suspicion has since been borne out. Although the function of many non-coding DNA sequences remains elusive, there is growing evidence that so-called “junk DNA” plays an important role in genetic regulation.

The Passion Survey will also be shown from October 18th at Greyfriars Abbey, Waterford, as part of the Waterford Arts Festival.