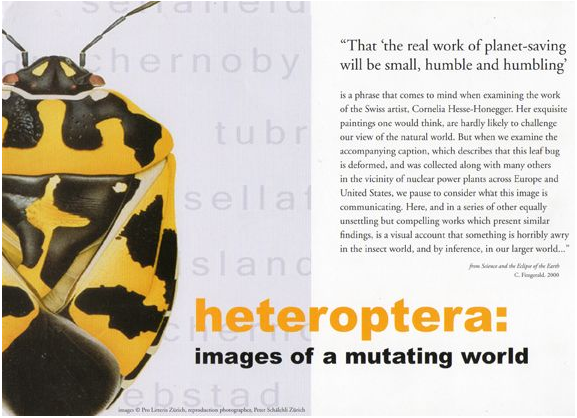 An exhibition of mutations in insects, painstakingly recorded by internationally acclaimed Swiss artist and former scientific illustrator, Cornelia Hesse-Honegger, is a startling and thought–provoking vision of the effects of low level radiation emitted by nuclear power plants and will be on display in Carlow this August.

Cornelia’s work came to international attention in the late 1980s when her artworks indicated that low level radiation, from the fallout of the Chernobyl disaster but also from the normal workings of nuclear power plants, contrary to nuclear scientists’ views, was and continues to have an effect on the environment.

Cornelia, a well respected and trained zoological illustrator of 25 years, who had incidentally worked at visually recording laboratory-induced insect mutations, is in a unique position to highlight this issue.

Cornelia’s detailed watercolour artworks and supporting data, showcased in this exhibition, highlight a significant international career that spans the last two decades in which she has endeavoured to engage people and scientists to look again at this issue. Her series of artworks are instantly intriguing, one can only marvel at the technical execution of her watercolours, skills that are rarely seen in contemporary art practice. Yet it is her subject matter and her on-going research into the effects of low-level radiation on flora and fauna that makes this work highly compelling.

Cornelia’s artistic investigations have taken her to Sellafield, Chernobyl and Three Mile Island as well as the nuclear plants in her native Switzerland and across Europe . Of particular interest to an Irish audience will be some of the artworks that she composed during a stay in the Sellafield area in 1989. And in a wider context, viewing Cornelia’s work raises questions against a debate that is rising again, that nuclear energy may be an answer to the imminent fuel crisis.

Cornelia’s work is also interesting in that is combines both an artistic practice and ongoing scientific investigations. Of personal interest to her is the need to re-examine how artistic practice is often sidelined in favour of intellectual, rational endeavours.

“Artistic work has become prey to anyone needing to decorate a wall, a building or for tourism. We don’t consider artwork to be a form of research…in schools, painting has become a nice distraction instead of a method of learning and to see what is.”

As part of Cornelia’s visit to Carlow she led a two day workshop in which she endeavoured to teach people, not just artists, drawing and painting skills, so that individuals will have the ability to quickly and accurately record their natural environment. 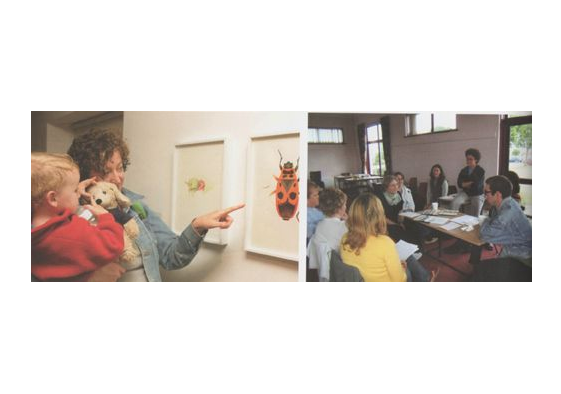 This project is a Visualise Carlow event, one of a series of advanced programmes to VISUAL-The National Centre for Contemporary Art in Ireland which opened in 2009. VISUALISE Carlow is now recognised as one of the most exciting public art programmes in the country.

Further detailed information about Cornelia’s work can be found in a CIRCA article, Science and the Eclipse of the Earth, 2001.  Visualise Carlow is a series of advance projects to VISUAL – The National Centre for Contemporary Art
Visualise Carlow is organised by Sinead Dowling, Arts Officer, Carlow Arts Office, Carlow County Council, Athy Road , Carlow , Ireland ;

For further information on Cornelia’s work read CIRCA article, see Science and the Eclipse of the Earth, a synopsis of a National College of Art & Design thesis, by Catherine Fitzgerald (2000)

Other major publications of Cornelia Hesse-Honneger’s work, detailing artworks in full colour and discussing her research and general comments on art and science (available for borrowing in Carlow Town Library)   Hepteroptera -The beautiful and the other, images of a mutating world, Scalo, 2001, 310 pp., see http://www.scalo.com

Other posts about Cornelia’s work 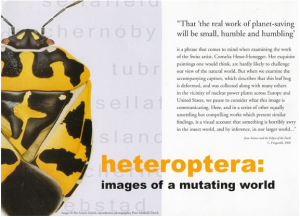